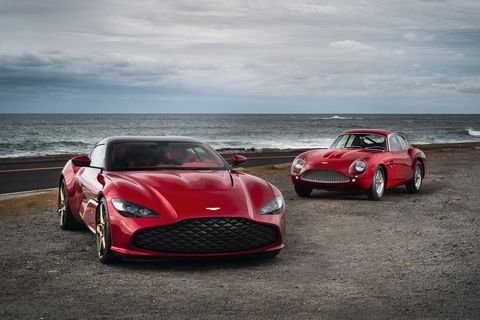 Aston Martin and Zagato have been working together off and on for nearly 60 years, producing some stunning cars in the process. None more so than the DB4 GT Zagato. The British automaker and the Italian design house decided to pay tribute, and these are our first real pictures of the final result, the DBS GT Zagato.

As first announced last year, the DBS GT Zagato will only be sold as a pair with a continuation-series DB4 GT Zagato. Just 19 pairs will be built, and the price is set at £6 million ($7.375 million, at today’s exchange rates) plus tax.

The DBS GT Zagato is based on the DBS Superleggera, but the Zagato actually makes a little more power from its 5.2-liter twin-turbo V-12—760 hp verses the Superleggera’s 715. But, it’s the bodywork that really separates the two. The DBS GT Zagato references the DB4 with its huge grille, bulging rear fenders, and double-bubble roof—a Zagato signature. There’s a lot of Vanquish Zagato in there, too.

The color, Supernova Red, is exclusive to the DBS GT Zagato, and accented by lots of gold trim, including real 18-karat gold badges. The grille is active, too, with diamond-shaped elements that can open or close as cooling requirements dictate. Inside, there’s a lot more red and gold in this car. Aston seems particularly proud of the trim, which is 3D-printed metal and carbon, an automotive first. The optional gold trim on this car is stainless steel, which apparently takes 100 hours to print.

Top Gear reported earlier this week that 18 Aston Zagato pairs had been sold, and that the 19th will likely be sold soon. We’ve reached out to Aston Martin to confirm if this is the case.

Deliveries of the DB4 GT Zagato continuation car will be completed by the end of the year, while the DBS should arrive at customer homes sometime next year.